They say that the best ideas are often the simplest ones. Uncover is a simple idea – an attractively designed Bible study resource with a series of six evangelistic studies in Luke’s gospel. This booklet can be used in small groups or more informally in one-to-one meetings. 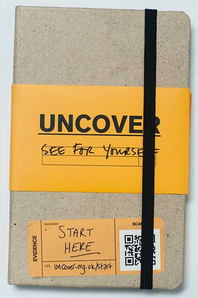 Along with it, a special “Uncover” edition of Luke’s gospel was published. It encourages seekers to go beyond reading just the passages which are included in the Bible study booklet to discovering the whole story of Jesus. This gospel edition includes links to short online videos which speak to some of the questions which seekers might have as they read the gospel.

After an initial training phase, the IFES movement in Great Britain (UCCF) challenged all of their core student members to read Luke’s gospel with at least five of their non-Christian friends.

Sam Hardy dared to take up this challenge: ‘I shyly asked my flatmate to do the Uncover study with me and he thoroughly enjoyed it. He has since become a Christian.’

Ed was invited to an Uncover Bible study by his Christian friend Jonno. He shares: ‘I found it interesting to look at the gospel in depth with someone who knew more about it. The more I read, the more I wondered if it were true. Jesus was always able to answer people’s questions and loved them. He was an incredible character.’ As Ed continued to investigate, he was drawn to Jesus and became a Christian.

Many similar stories could be told. All of this is taking place in a post-Christian context which means that many students have little or no understanding of who Jesus is and what Christians believe. A negative attitude towards faith is common. Uncover invites these students to examine the evidence about the life and purpose of Jesus using Luke’s gospel – to uncover for themselves who he is. Instead of expecting the students to come to Christian meetings, the gospel is taken to them: in the coffee shop, in their flat or wherever.

The response to Uncover has been amazing. Students have grasped the vision like we have never seen with any past gospel project. They have found new confidence to invite their friends to meet Jesus in the gospel. Since we started this project in 2011, thousands of non-believers have been reading Luke with their Christian friends; hundreds have come to faith. God’s Word is still powerful to draw students to Jesus today – in any and every context!

It has been encouraging to see that a number of other IFES movements in Europe have been inspired by Uncover. Some have translated the material for use in their own context.